Kilian Kerners S/S 16 men and woman show, was late to start and found his inspiration in the past. It was a collection for grown-up women and nerdy-cool boys.
Kilian’s inspiration was „My journey to the stone desert” expressed in the orange, red soft color-palettes, with highlights in blue and mint greens. The graphic pattern seemed to be inspired by Sonia Delaunay paintings and cubism combined with Bauhaus elements.
The mens collection was a lot about layering different graphic pullovers with blouses and shorts or bermudas. One element that he was using for both, men and women was a white turtleneck underneath the graphic pattern. The womens collection was all about cool, clean cuts, expressed in knee-length skirts and maxi dresses. The patterns like silk and knits were mixed, which reminds on the title of the collection: „Bittersweet: The chemistry between different things.” 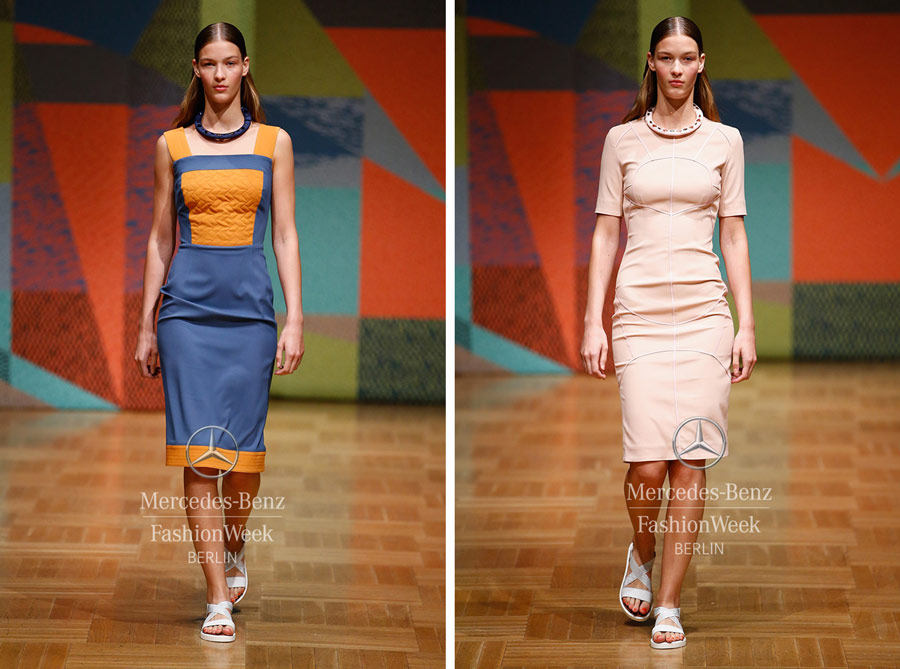 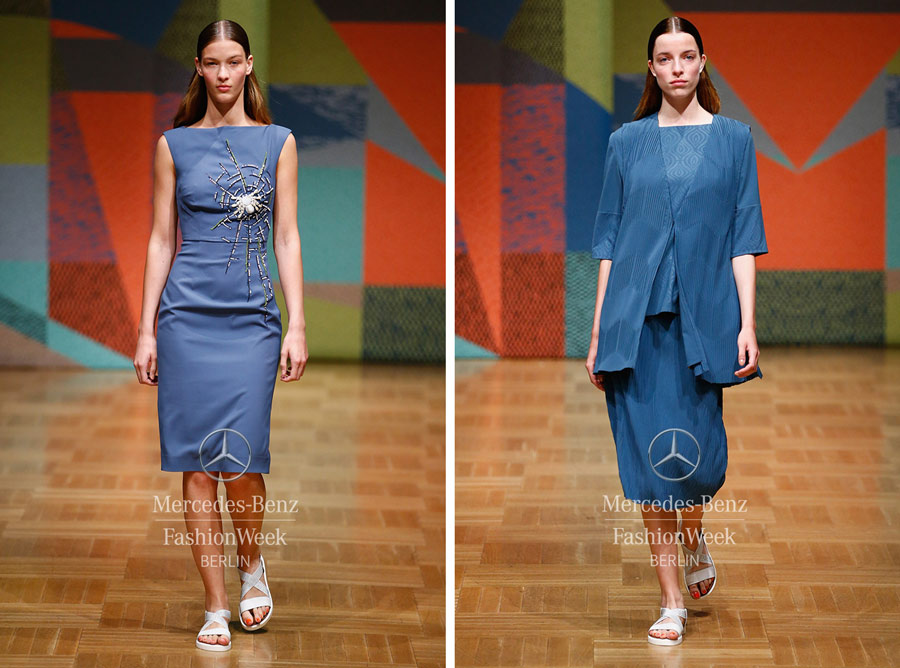 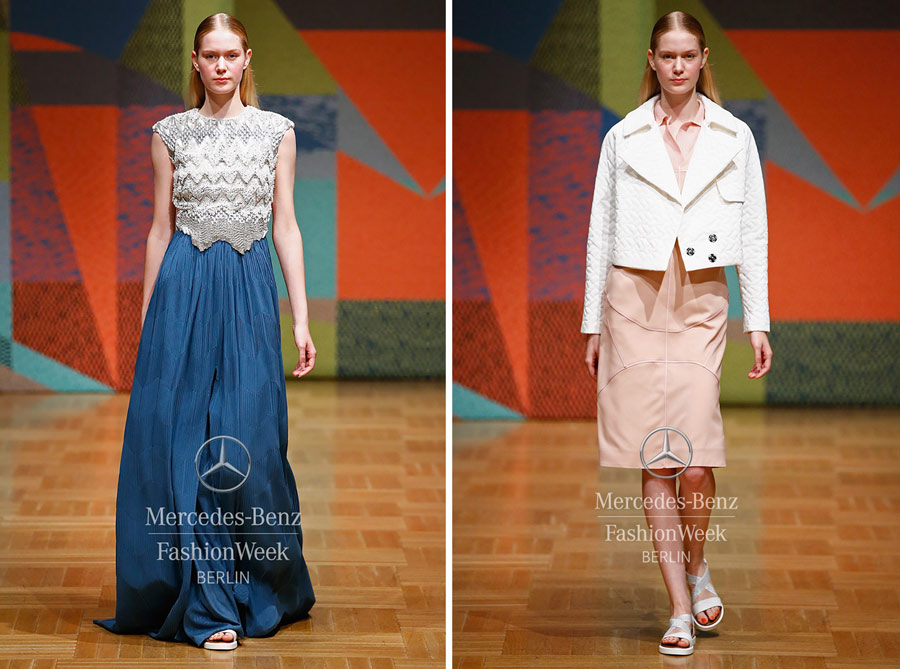 „They’re sticking leafs all over my body… with glue! I don’t feel like a model.”
It was a pop-up show: The day before the event, everyone got the address of the place to be: A park. The Julian Zigerli S/S 16 show turned out to be the most innovative presentation at Berlin Fashion Week so far. The models were walking on the grass, while each of them was carrying a radio with different music for each outfit. Eventually the show transformed into an exposition, where the guest were able to have a closer look on the fabrics and details. The highlight of this event was RJ Mitte walking down the runway in between all the other male models.
Julian Zigerli was inspired by his recent trip to Japan. He said that the Japanese people are “naturally flirting with the cute and lovely” which inspired him more than the landscape. The “White Rabbit” show was very arty sportswear: Shorts and T-shirts with rabbits drawn on them, all-over prints, playing with shades and proportions, neon colored shirts and surreal flowers.
The make-up was very natural, except for the grass that was glued onto the feet and arms of the models – reflecting the park surrounding. 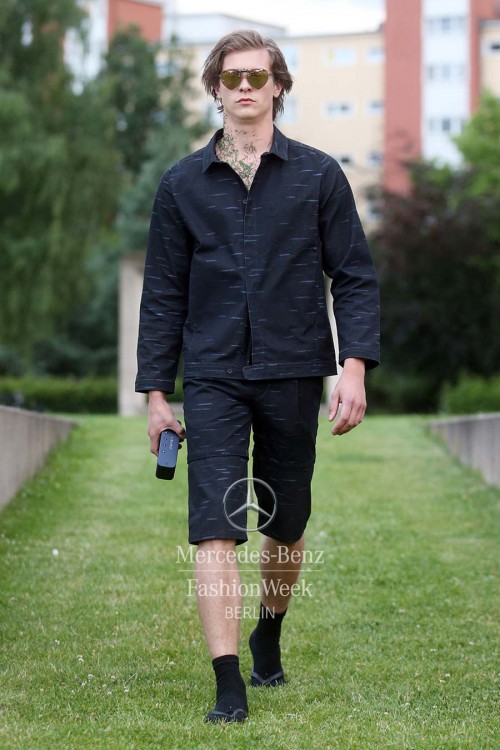 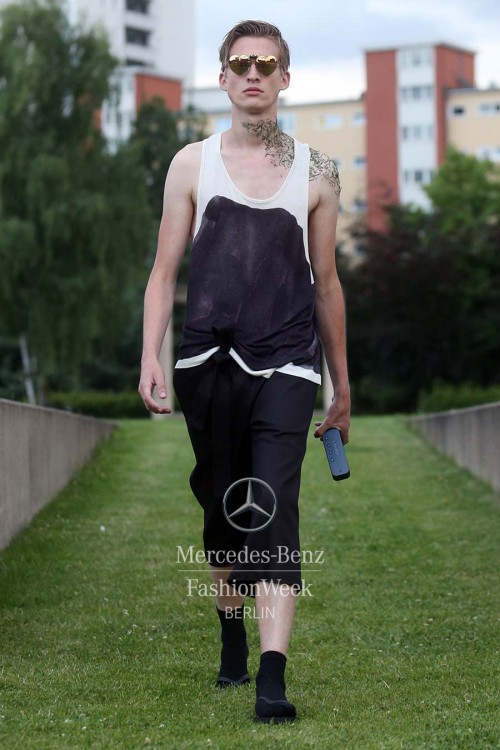 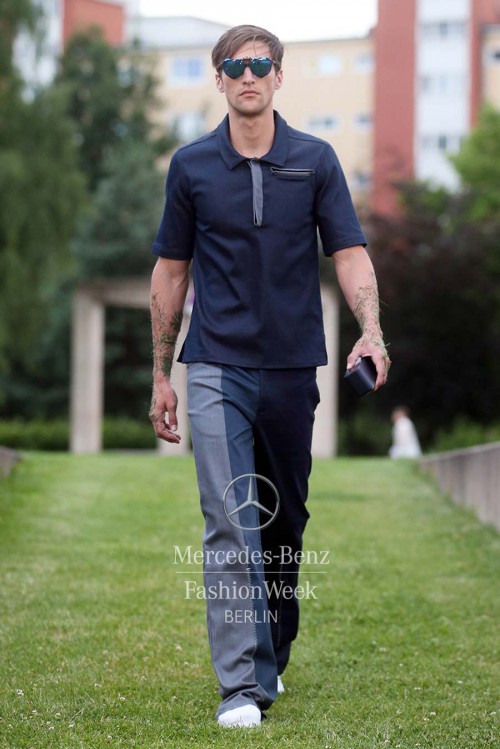 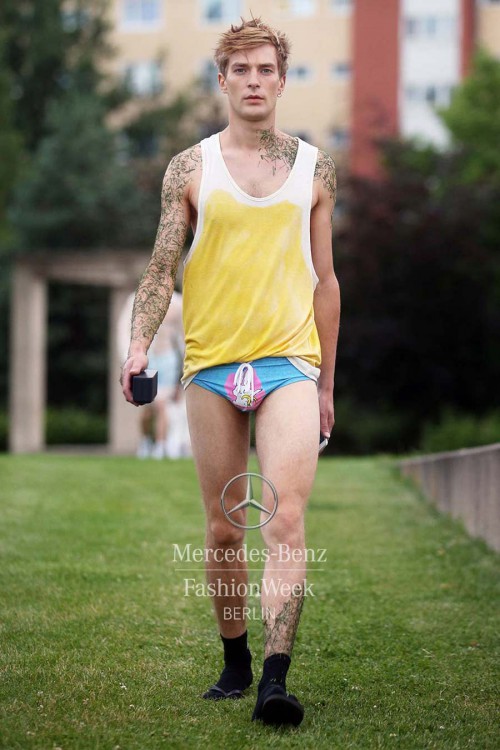 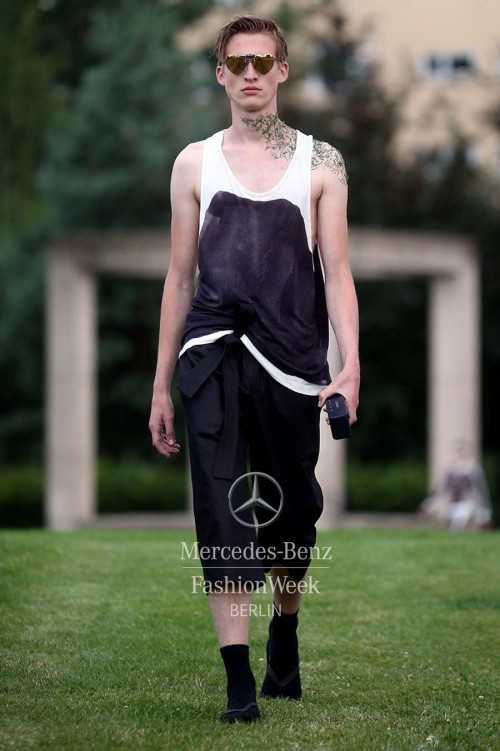 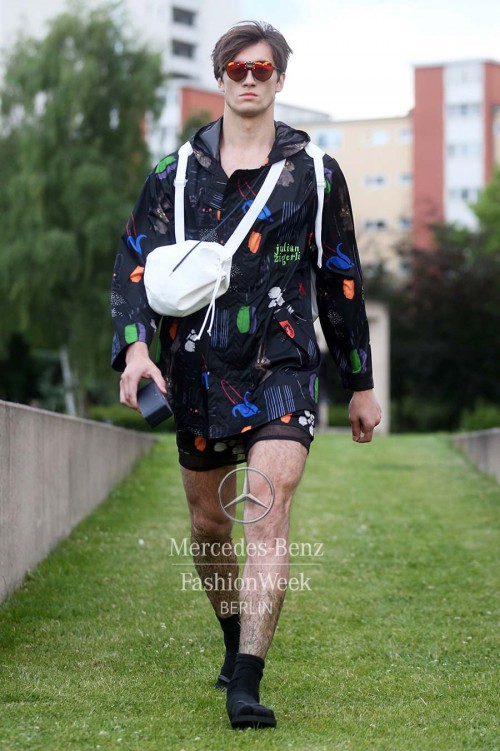 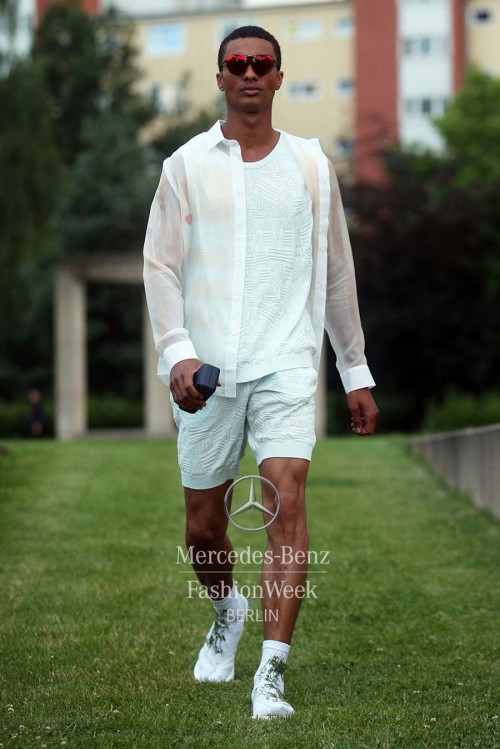 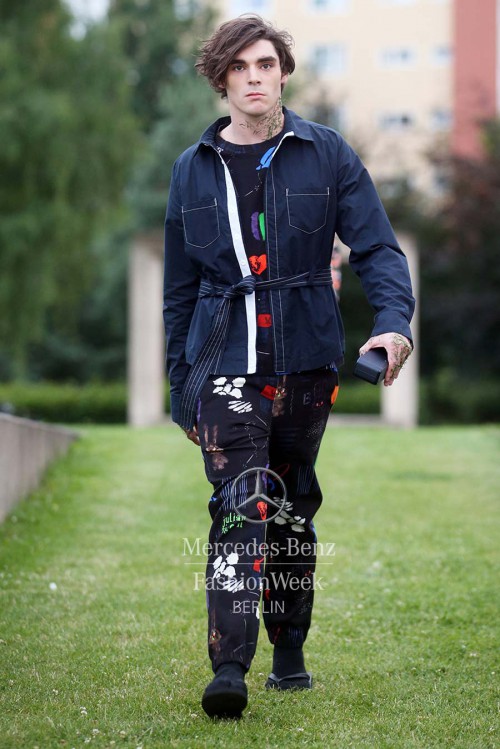 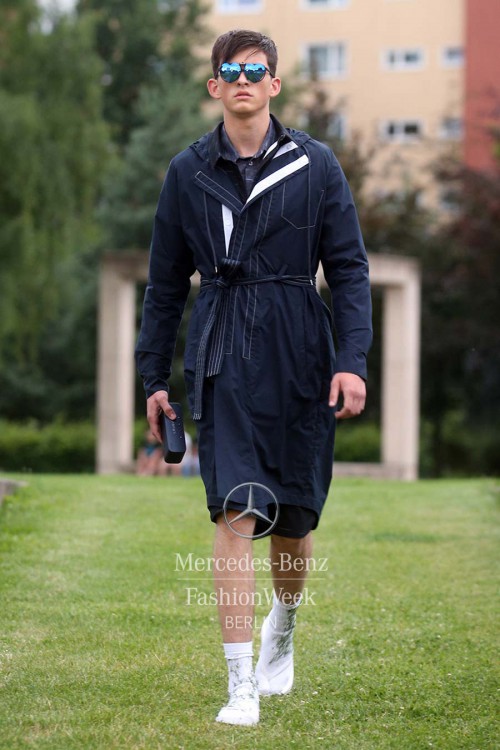 Hien Le’s S/S 16 takes us to Wimbledon, London, where the half finals are currently happening. The show was very typical for him at the first glance: Purism expressed in clear lines and cuts, with small highlights at the way he drapes the pleats. The colors were pastels, grasgreen and a lot of white – clearly showing the inspiration of this seasons collection: tennis in the 60’s and 70’s.
The models were walking down the runway at the Kronprinzenpalais, in sporty dresses, high-necked blouses, pleated skirts and satin shorts. He combined linen and cotton textiles in different layers, played with cut-outs and transparency. Hien Le played Hip-Hop like 50 Cents „Candyshop“ as a clear contrast to the purism on the runway which was amazing and bizarre at the same time.

The show was the perfect example, how modern minimalism can look like. He clearly won this game. 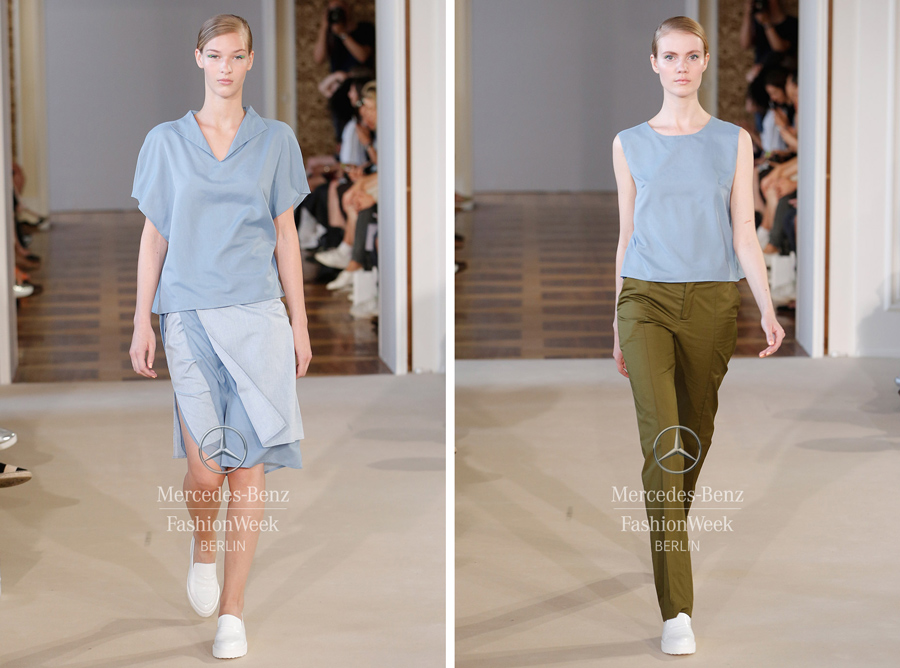 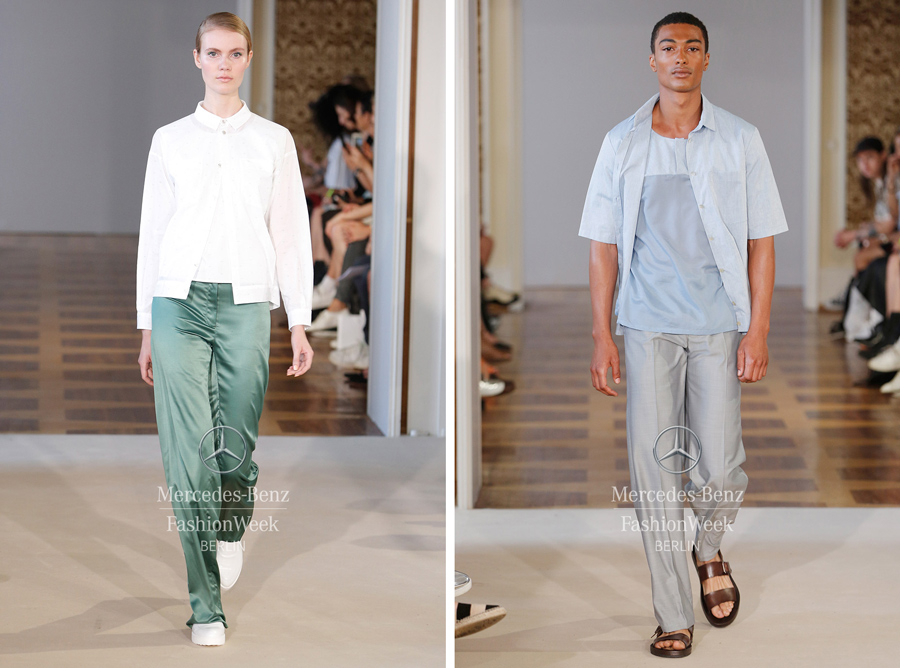 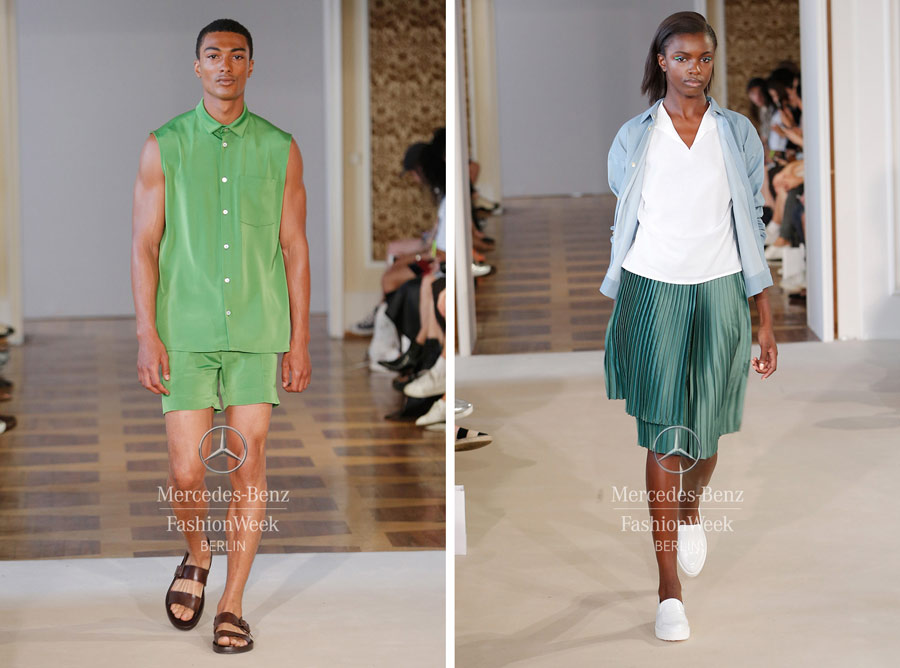 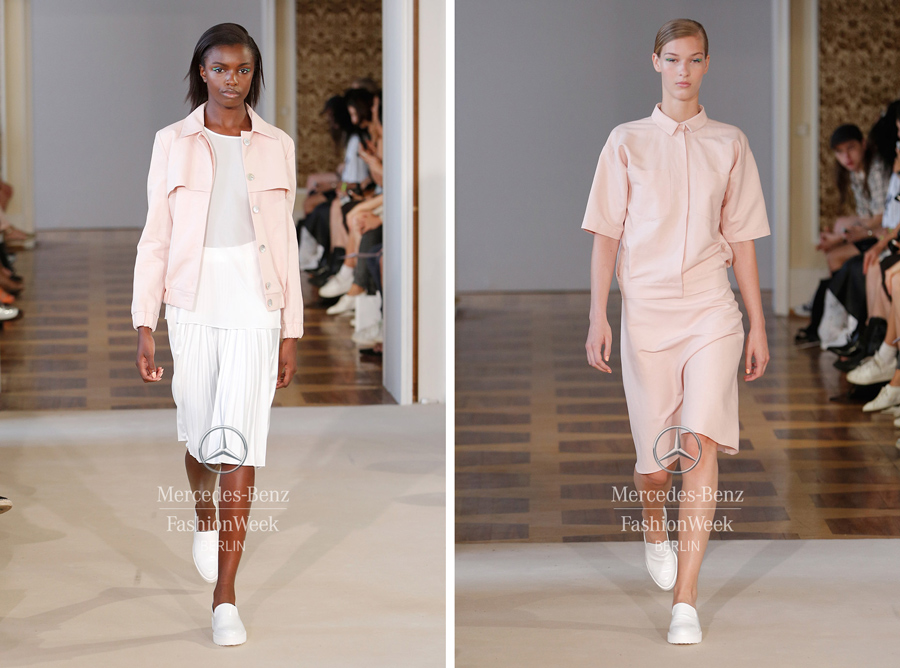 How much color tolerates the modern man?

Ivanman is crashing color-boundaries in his S/S 16 show, simply to teach us that taking risks can turn into fascination. The Serbian Ivan Madzukic, who created his label in 2010, is known for his minimalist silhouettes and clear line, while it is always wearable. This time, he combined layered shirts in plain vibrant colors, with grey pleated pants and simple cutted jackets. The outstanding details were the two overlaid collars in contrasts like yellow and turquoise or pink and yellow shirts.

Furthermore: Pants at half-mast are back! At least when it comes to IVANMAN. He combined them to high-cut socks in mustard yellow or red colors, which immediately reminds you on the Michael Jackson Silhouette. The red bomber jackets which end in the waistline were his signature as well. Another special were the knitted tanktops in pastel colors.

What can we learn from IVANMAN? Vibrant colors for men? We should definitely give it a try! 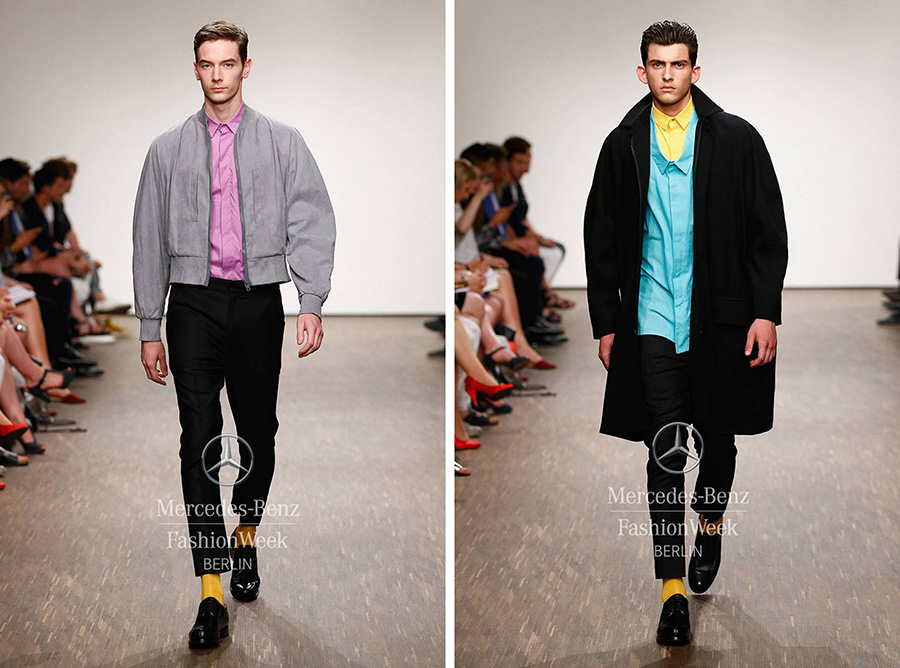 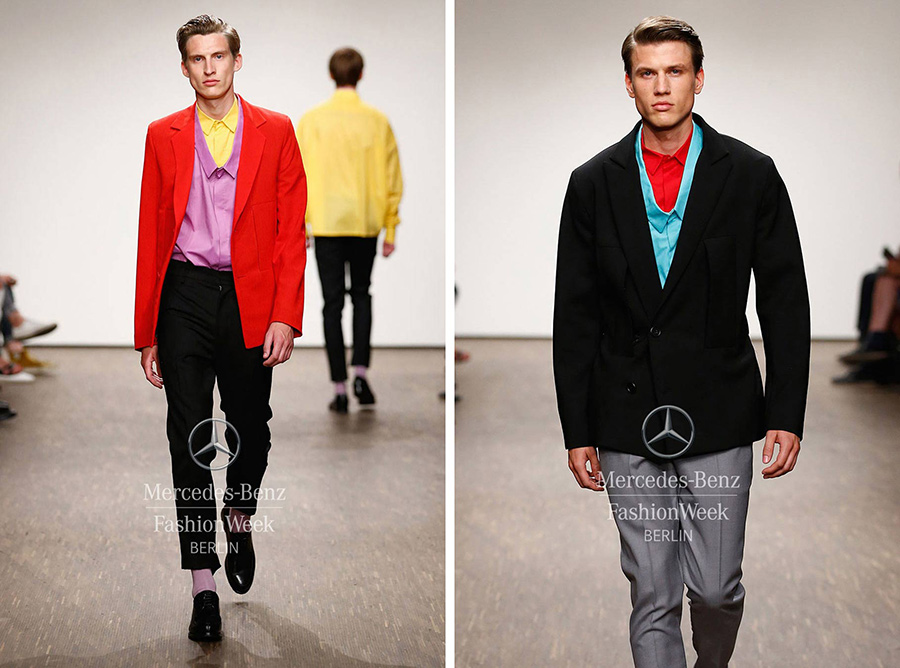 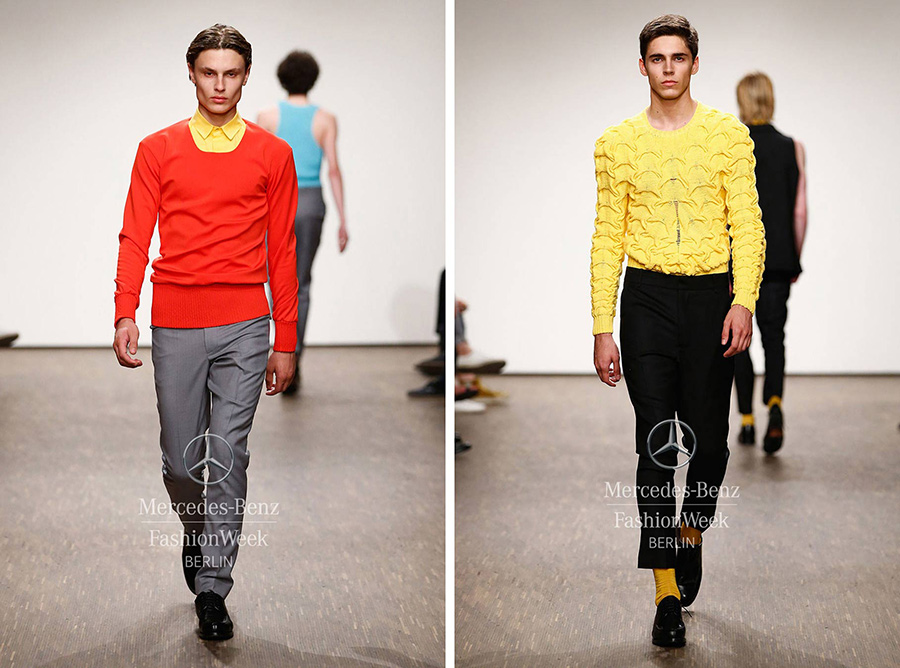 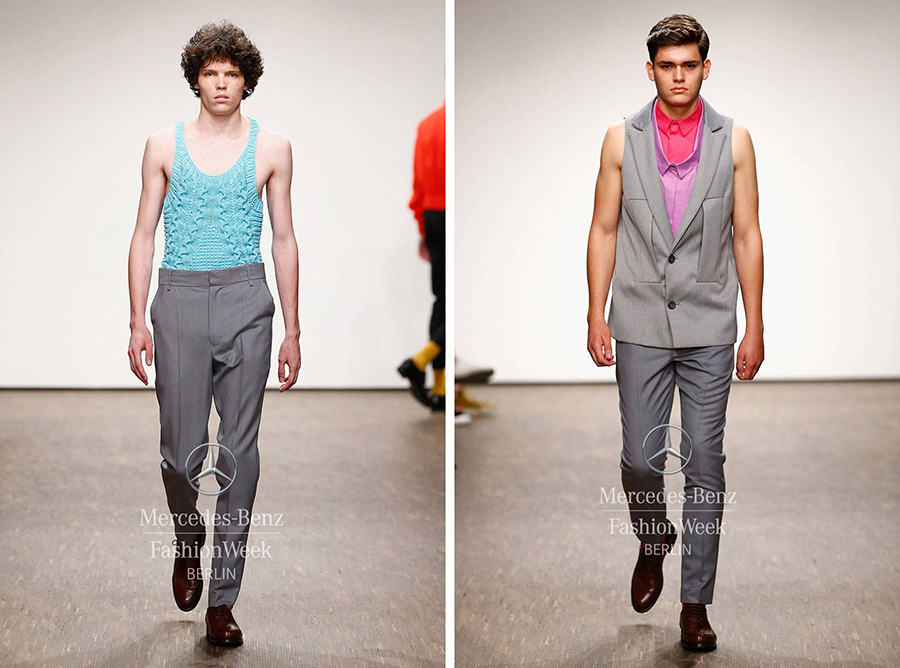 The Lena Hoschek Show on Monday morning was an invitation to travel back in time to meet her at a picnic in a flower garden, somewhere in the south of France, when Saint-Tropez was the place to be and Jet-Set was the approach to life.
As always Lenas S/S16 collection is all about happiness and femininity but this time she added some more romanticism than usual. She said that her show is a “mixture of typical french Nonchalance and a romantic bohemian-chique”. The mainly white, sometimes lacy, dresses were all about taking the life with ease. Different variations of colorful flower prints and fabrics were re-manufactured from original 1850 Provencal patterns. The A-Lines and 50s silhouettes, swinging dresses and skirts were typical Lena Hoschek cuts, embellished with broderie anglaise and braids.

To underline the mood of a day “en Provence”, the models were walking down the runway with flower crowns and straw hats, while french chansons were playing in the background. 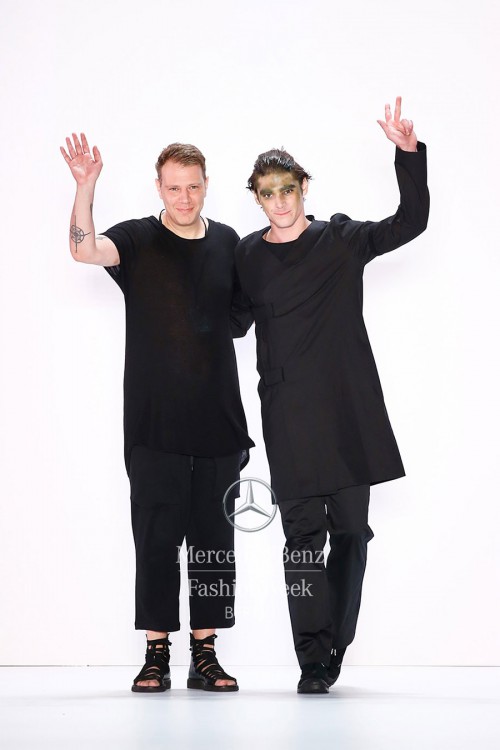 The Berlin Fashion Week has finally started with the label SoPopular and it came with a huge surprise: Hollywood in Berlin with „Breaking Bad“ star RJ Mitte opening and closing the show.

The Spring/ Summer 16 collection was very japanesque, with a lot of plain-colored looks. The colours were very typical for the designer Daniel Blechman: a lot of black, white and grey. But this time he added some military green, which could also be found in the dark make-up – very Mad-Max- like.

He played with a lot of asymmetric cuts, material-layering like fringe pullovers and combined it to small trousers in different lengths. An eye-catcher was the transparent plastic-vests the models were wearing on top of some looks.

Together with stylist Paul Maximilian Schlosser he reinvented the old school sleeve holder into a new it-accessory item: Sleeve holders on top of the sleeves.

With his combination out of Japanese inspirations and urban Military looks- the summer 2016 seems to become an interesting time to push some boundaries.

It is “The last march before victory”. 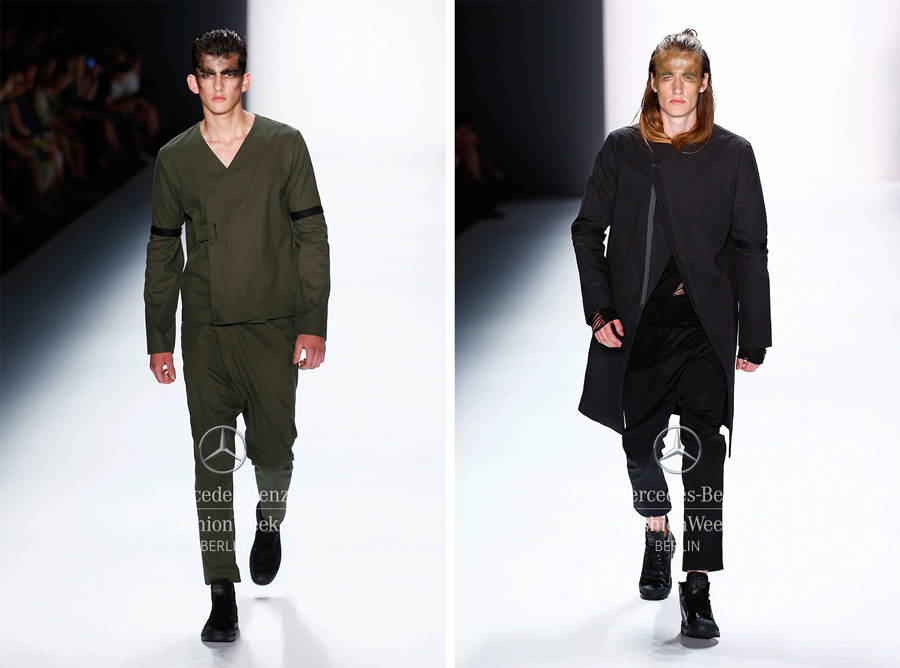 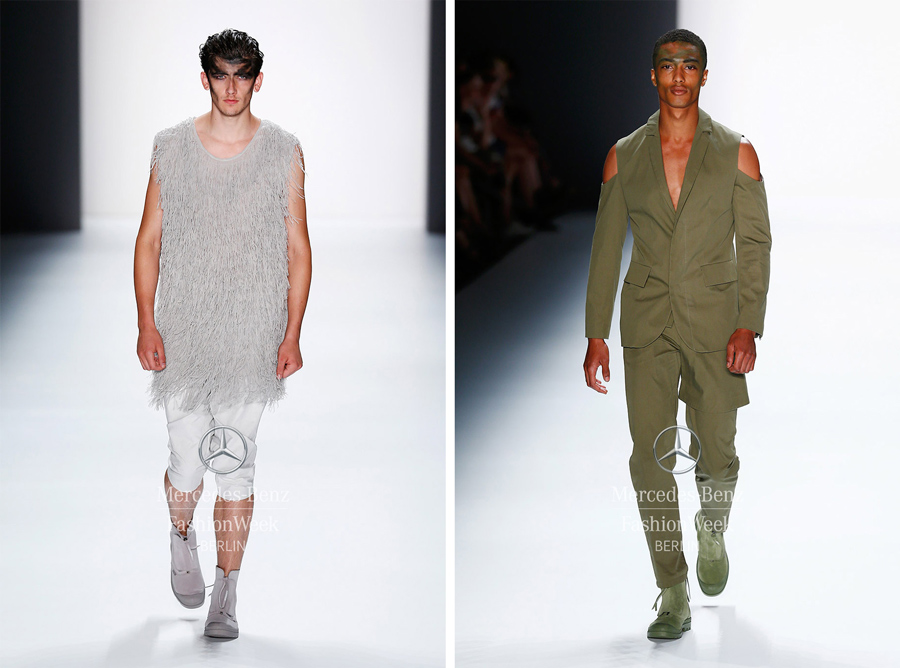 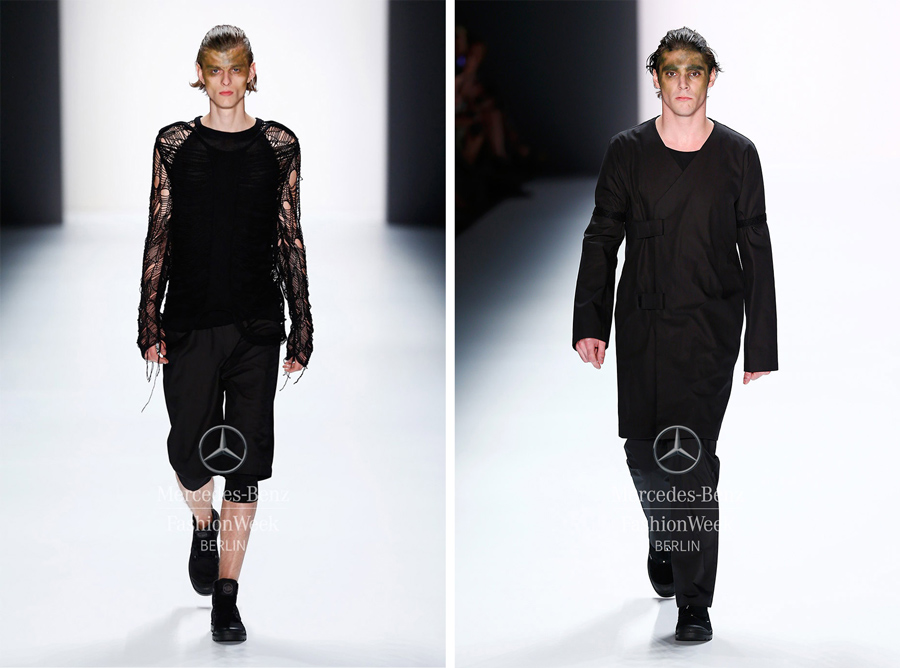 KILIAN KERNER   Sturm & Drang Kilian Kerners S/S 16 men and woman show, was late to start and found his inspiration in the past. It was a collection for grown-up women and nerdy-cool boys. Kilian’s inspiration was „My journey to the stone desert” expressed in the orange, red soft color-palettes, with highlights in […]