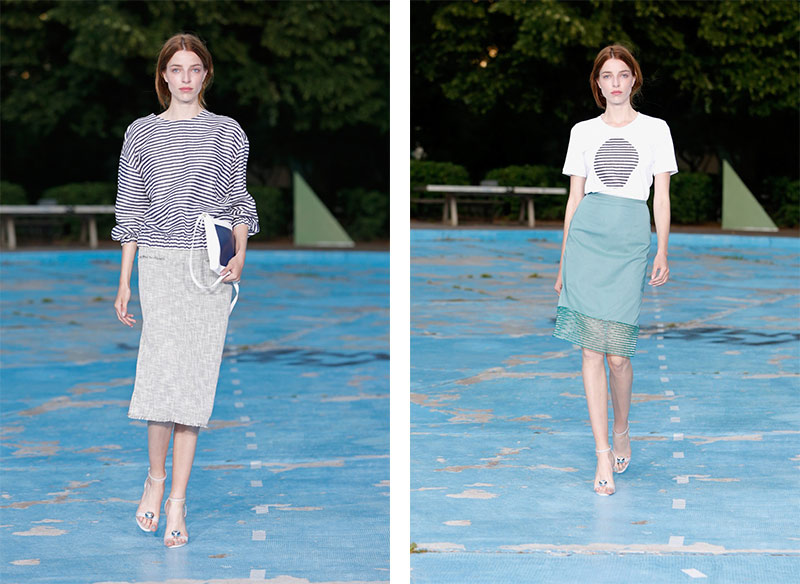 The second pop-up fashion show at the Berlin Fashion Week was the S/S 16 Perret Schaad show. The location, a swimming pool without water, was surrounded by stereotypical Berlin apartment buildings, It was the perfect location to reflect the inspiration of the clothing. Tutia and Johannas developed a very clean but still romantic collection for self-confident women, while they were inspired by a hot summer day in a city close to the ocean and especially the contrast between the heat on the street and the cold water.
The designer-duo expressed this summer intensity in classical elements like stripes combined to loose blouses with an self-designed print. The collection impressed with draperies, flowing silhouettes and a lot of material combinations in dresses, skirts and shorts. One highlight were the 3D printed turquoise elements on white organza material combined to midi-length skirts with a slanting ruffle on bottom of the skirt, a mermaid-line emerges. On the one hand they showed a lot of grey cotton pieces, representing the heat on the pavement and on the other hand, they played with the colors of the sun and the sea blues and light rose. It was the perfect location full of color and lightning to carry the idea of the intensity and freshness of this S/S collection. 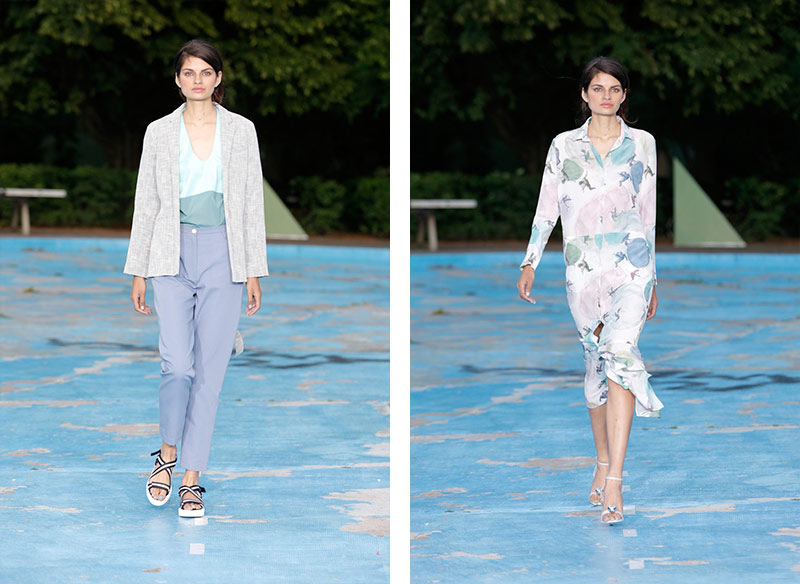 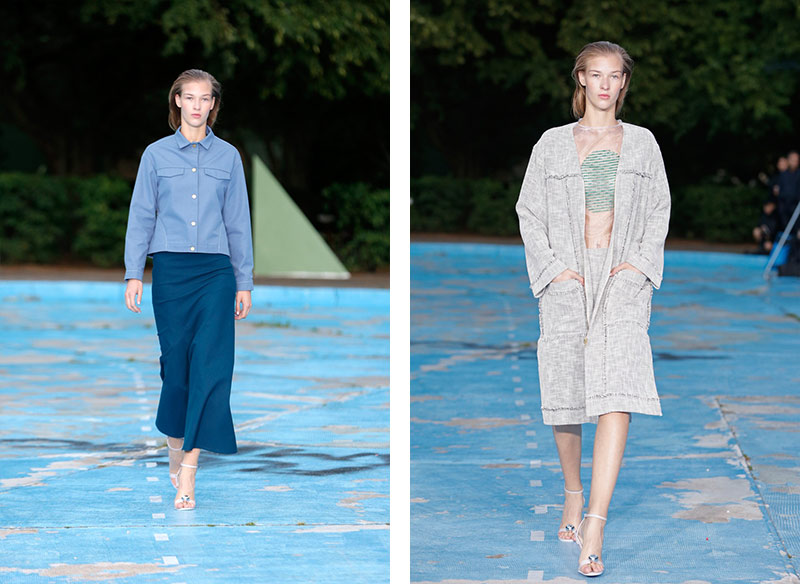 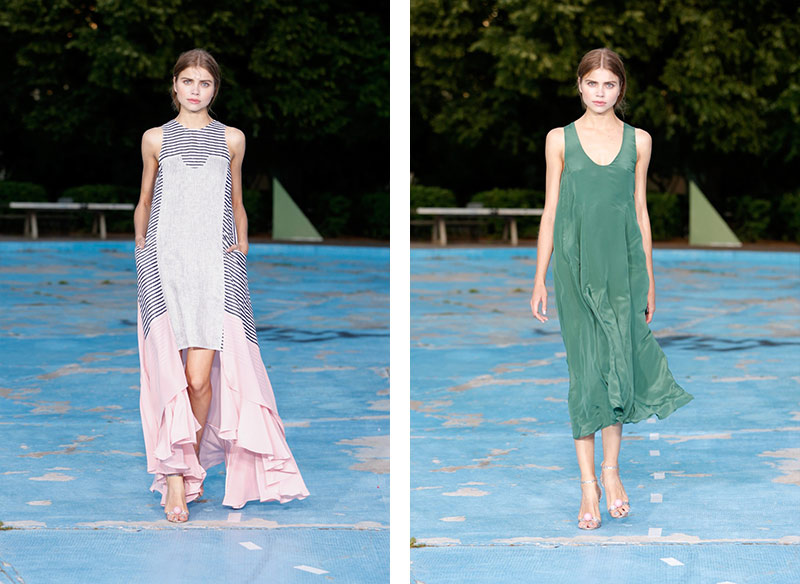 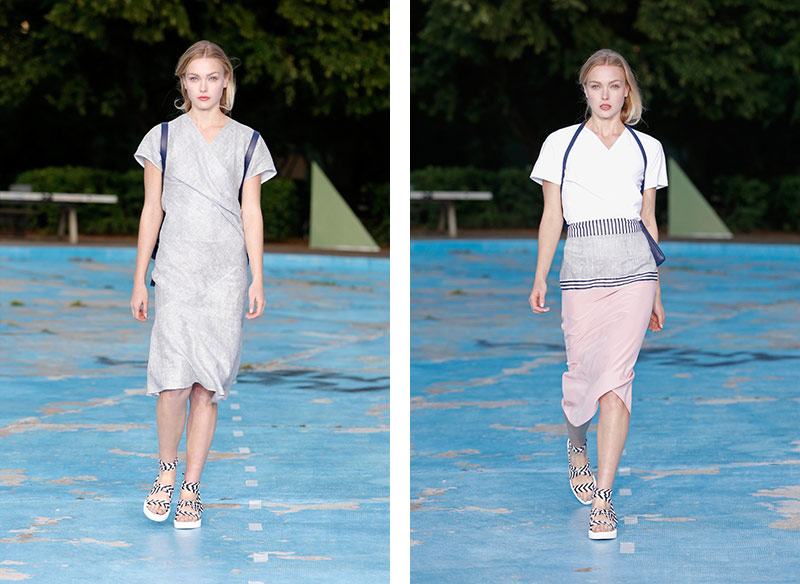 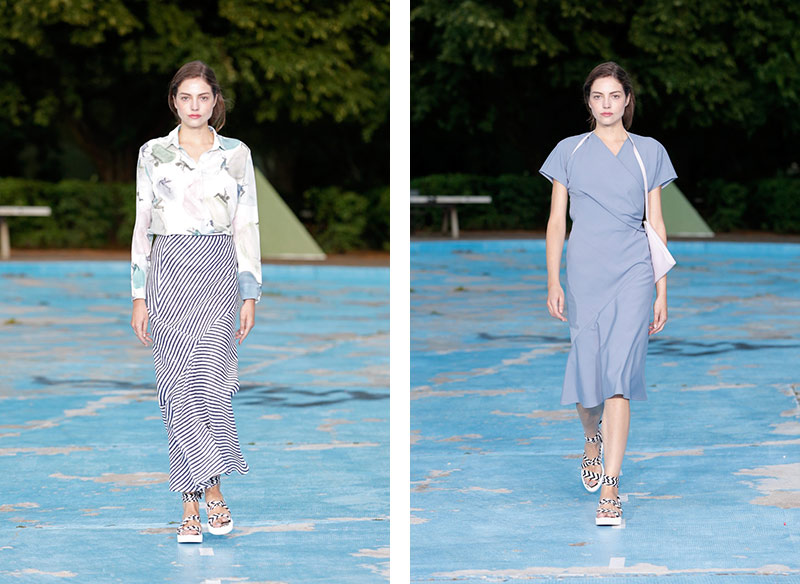 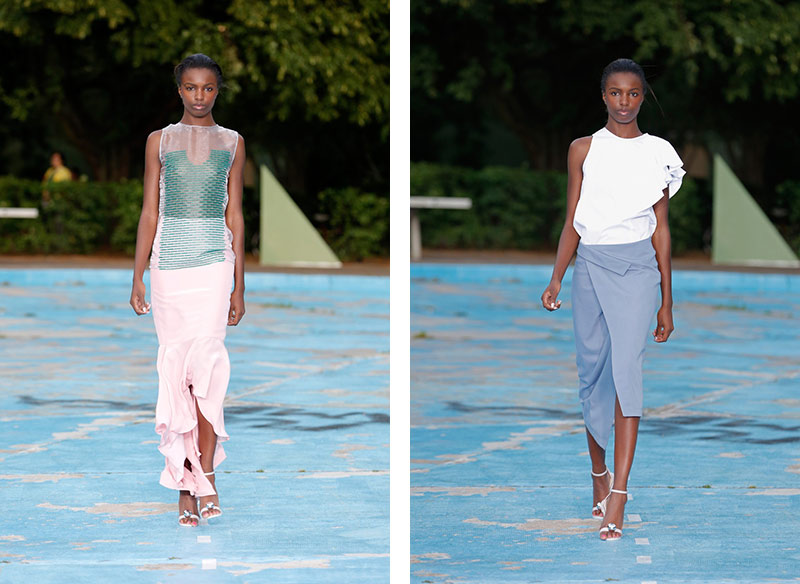 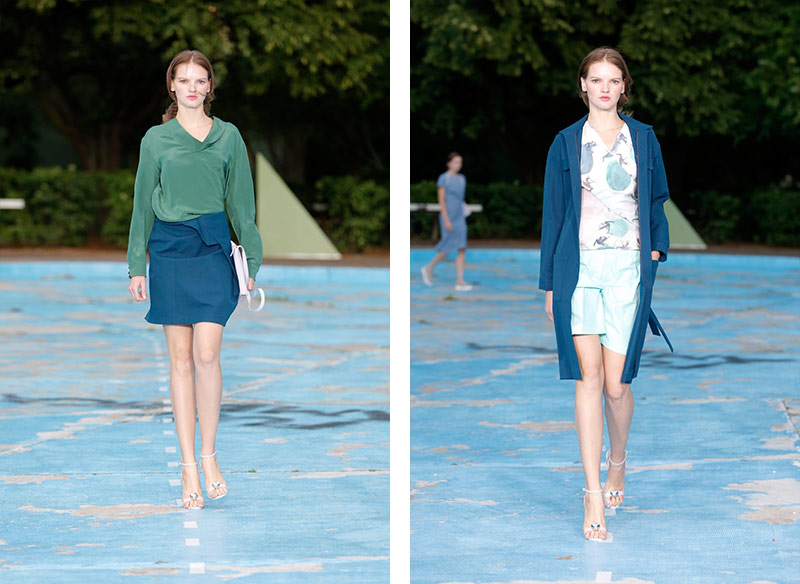 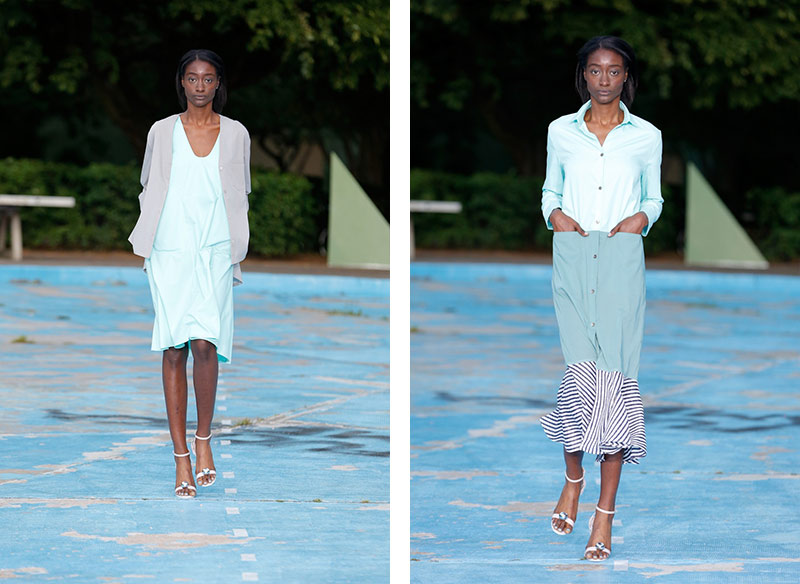 The S/S 2016 Malaikaraiss show was a nostalgic quotation of her youth. When she was a juvenile, she went to demonstrations, Green Day was her most favorite band and her inspiration was the skate-punk-rock scene at the American West Coast. It was one of the last political youth cultures.
This time she used a lot of black elements, next to white and a very light blue, which gives the collection a more serious touch. She played with typical menswear elements like suits but turns them into a feminine piece by adding some transparency. She transformed the typical baggy pants, known from the skater scene into Culottes out of floating silk, combined to clean cut hankiehem dresses. All the looks are very artificial, even though they are clean on the first view. Pants and dresses are ending in a midi-legnth: in the middle of the calf, which creates a very modern silhouette.
The collection carries Malaikas thumbprint but it is more plain and less romantic as her previous collections. She showed the perfect dresses for grown-up and sophisticated women, who still carry the spirit of the youth.

Huge applause for Marina Hoermannseder after her S/S 16 runway show at the Kronprinzenpalais – and she deserved it. Her presentation was the perfect example, how a brand can develop without changing her signature and it was a refresher after all the perfectly wearable collections at Berlin Fashion Week.
Marina is known for her sculptural corsages and skirts out of leather belts. While her last collections were very cool and strong, she taught us this time that leather and plastics can become very romantic.
The first look showed us the direction: The typical silhouette with a small waistline and a huge tulip skirt, highlighted with a leather belt. She added little leather flowers in pastell colors all over the skirt, combined to a silk top.
The austrian ESMOD graduate plays with flower details, silk and lace but almost always combined to skulptural pieces like cronline dresses or brush holders, which were 3D printed.

She was one of the few designers at the Fashion Week, who was not afraid to take some risks and it turned to be a little Haute Couture.

Perret Schaad SS 2016 and others at Berlin Fashion Week

Anna-Maria The second pop-up fashion show at the Berlin Fashion Week was the S/S 16 Perret Schaad show. The location, a swimming pool without water, was surrounded by stereotypical Berlin apartment buildings, It was the perfect location to reflect the inspiration of the clothing. Tutia and Johannas developed a very clean but still romantic collection […]